In college, a journalism professor once said, “If your Mama says she loves you, check it out!”
Meaning? Never stop seeking accuracy.

I peeked at the Lon Simmons Wikipedia entry to start a letter to the broadcaster.

I found a story that seemed too good to be true. To quote:

“At the start of the ninth inning of Game 4 of the 1989 World Series, Athletics’ lead announcer Bill King, scheduled to announce the final inning’s play-by-play, instead deferred to Simmons, who was thus able to announce to his radio audience three batters later that the A’s had won the World Series over Simmons’ former team, the Giants.”

I wanted to see if Simmons could detail the emotions behind such a gift.

Oops! Shades of journalism class! It seems the tale just might be too good to be true.

“I hate to ruin a touching story, but Bill did not turn the mike over to me. It was during the final two games after the earthquake and Bill had throat condition that left him almost speechless so I had to broadcast all of the games.”

The moral? Be careful in quoting baseball history to history-makers. Hope that you’ll always be writing to a Lon Simmons, someone happy to set the record straight.

My professor would be proud. Or, he’d want you all to pay tuition. Class dismissed! 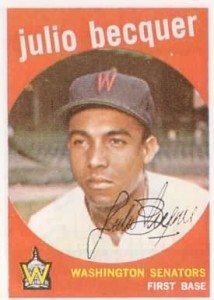 I wrote to Julio Becquer (b. 1931), asking three questions. This 70-something stunned me with his reply.

“Tom – Wikipedia will give the whole history of my career and more.

Really? Here is Mister B’s Wikipedia entry, for all you to judge.

What did I ask about? First, how did he learn English after his arrival from Cuba? What coaches or players helped him adapt? Second, I wanted to know about that game-winning grand slam on the Fourth of July, 1961. Lastly, I asked about the secrets of his pinch-hitting successes. How did he prepare during the game for his one late-inning opportunity?

Becquer included a signed photo. His signature still matches the facsimile autograph on the 1959 Topps. I wonder if he’s smiling more these days? Those are some serious-looking baseball cards!