Roe Skidmore made that one career hit as a Chicago Cub count.

Topps deemed him worthy of inclusion in the next year’s set.

More than 40 years later, what does he see on that card?

“The 1971 Topps picture was actually taken in spring training at Scottsdale Stadium in Arizona.

To this day, I receive approximately 2 to 3 dozen cards per week from collectors to autograph. Still feels good that people remember me.”

Coming Thursday: An Illinois native playing for the Cubs! 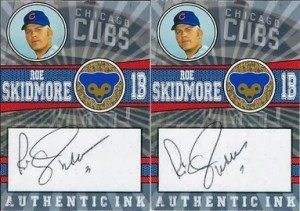 I received one awesome letter from Roe Skidmore, a brief member of the 1970 Chicago Cubs. He was one of the AAAA stalwarts of the early 1970s, someone who conquered AAA but couldn’t get a full shot at the majors.

I’m grateful that such men like Skidmore aren’t bitter, but cheer on collectors.

As luck would have it, my HS baseball coach was in attendance at Wrigley Field that day.

After the game, I called my Dad and we cried together on the phone! First Big League Hit!!!”