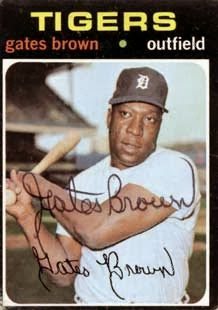 Condolences to all Tigers fans.

William “Gates” Brown, one of the greatest pinch-hitters of his generation, has died.

Detroit fans often saw Brown at games. He signed at team functions, long after his retirement.

In person, he was a prince.

However, www.sportscollectors.net listed just 43 successes in 80 tries over the last decade for TTM attempts. No 2013 successes were recorded.

As recently as five years ago, Brown was including extra photos with replies. My brother mentioned that his bonus looked like a candid someone snapped. Others said that Brown wrote the photo was from his own collection, even laminating each.

Health problems or even one greedy form letter could have slowed his TTM signing generosity.

Anyone who met Brown got more than an autograph. They got an experience. A handshake, a picture posed for, a story shared — the full effort.

Give that same effort when you write any retiree. I don’t think you have to send a page of flattering lies, or a $5 bribe for a better chance at a response.

1. Why do they matter?
2. Why are you the most deserving writer in the pile of envelopes?

If Mr. Brown can slide into second with a mustard-drenched hot dog in his pocket, you can write a letter that counts.