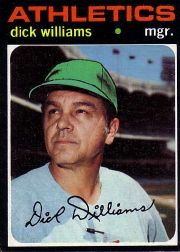 Today is about how much you get, right? Or, how much you give? As in, so many kids trick-or-treated here, there’s no candy left for me!

Here’s another take on giving and getting.

I’ll never forget sitting on the couch with my dad, watching the Oakland-Cincinnati World Series. He fell off the couch laughing his a– off (yes, it’s hard to sit without one of those!) when Johnny Bench fell for the fake intentional walk.

I wrote to Dick Williams long before he was a Hall of Famer, long before he charged for autographs. I never asked for an autograph. I just wanted him to have another perspective on the classic moment.

I related my dad’s comments. I thanked him for making my dad laugh.

Dick sent back an Expos postcard of himself, thanking ME for a great story. He added a note that Rollie Fingers later told him he hadn’t seen that play work since Little League!

As I watched this World Series with my wife, she saw a close-up of Tim Lincecum.

“He looks like a sad Pee-wee Herman before he pitches.”

“His name is Hunter Pence? I thought Joe Buck called him UNDERPANTS.”

All I know is that humor can make a difference!

1 thought on “Hall of Fame Manager Dick Williams Shared A Laugh And Autograph With Me!”