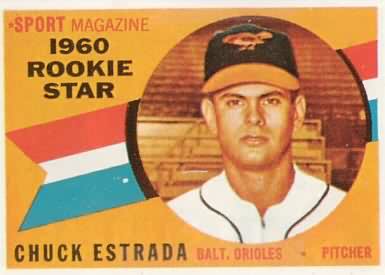 ﻿ In February, I wrote about then-PCL pitching coach Chuck Estrada brushing off collectors, challenging them to explain why they wanted HIS autograph.

I was thrilled to hear from Theo Gideon in Tacoma, Washington. His experience asking for an autograph produced a much different, happier result. Theo wrote:

“Around the same time that you encountered Chuck Estrada, I attended the Tacoma Tigers Baseball Camp For Kids.  Chuck was a part of the camp staff.  My father had in his possession for many years a (Spalding?) Chuck Estrada [endorsed signature model] baseball glove.  Upon hearing of Chuck’s involvement in the camp, my father asked if I would take the glove to the camp the next day and have Chuck sign it.

As a 12 or so year-old kid, I was embarrassed of my father’s request.  Grudgingly I pulled the glove out of my bat bag. I explained to Mr. Estrada that my crazy dad had his glove for many years and had even restrung it, and asked if he would sign the glove.

I was amazed to see the Chuck Estrada’s face lit up like a Christmas tree.  He walked around with the glove showing it off to all of the young Tiger’s players and staff members.  I believe he said to a group, “You see, there was a time when I was a big deal.  Look, I even had my own glove…”  He was smiling from ear to ear and carrying that glove around.

Many of the Tacoma players laughed and joked with him about the glove.  I wasn’t quite sure if he was going to give it back.  But he did, and signed it multiple times. I will never forget how happy he seemed, knowing that someone still had his glove.  I guess I gave him a good ‘why’ in my pursuit of his autograph.

My father still has that glove today.”

You are an all-star among collectors, Theo. Thanks for sharing!