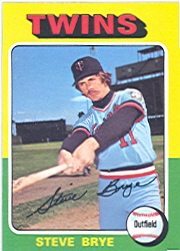 I tried. His all-star humility can outhit any compliment. Retirees are entitled to a bit of chest-thumping remembrances. Especially a platoon player. “I was great when I got to play. Could’ve been greater!” is the common response.

Not Brye. This team player’s letter was a classy reminder of the 1970s players I admired most.

I asked about being a first-round draft pick in 1967. He remembered…

“In 1967, the draft was very low-keyed compared to the draft now. I had a good friend who covered the Oakland Raiders for the Oakland Tribune. I went to work with him on draft day and watched the picks come over the ‘tele-type.’ I found out afterwards that the Giants, with the next pick, were going to draft me as a catcher. So it all worked out.”

Wow! There’s one possibility for Twins and Giants fans to ponder. “Now batting for the Giants, catcher Steve Brye”?

I found on http://www.retrosheet.org/ (thanks, guys!) evidence of one of Brye’s biggest games ever: four hits, four RBI, three runs scored — a 1974 slugfest at Tiger Stadium. Brye noted:

“I was fortunate to have good games in Detroit. I loved playing there. For some reason, players have real success against some teams and not so good against others.”

“I was a contact, gap-to-gap, hitter, so that approach helped me against Wilbur Wood and his type of pitcher. I had to get my hits then, because after the 5th or 6th inning, they would bring in Terry Forster or Rich Gossage!”

Lastly, Brye added a note about the meaning of baseball. I had read comments from other collectors that Brye had mentioned that he had taken baseball trips to Cuba. I asked. I’m glad I did! He added:

“Yes, I went to Cuba to play ball, last Feb. and five years ago (Santiago and Havana). It was great. The people were great and I felt very safe there.


Baseball is a terrific common denominator, and has provided chances for me that I would have never had, and to develop relationships that last a lifetime.


Thanks for your interest. All the best —

Here’s a classic essay by Josh Wilker of “Cardboard Gods” about Brye.