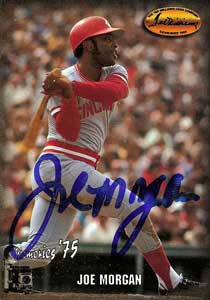 The first one was the manager. The second became a Hall of Famer in 1990. Different skin colors, too.

Boston’s former pilot has been branded “The Other” Joe Morgan by some collectors. Some beginners haven’t been as lucky in knowing the difference, it seems.

Ready for a shock? From the former Red Sox skipper —

“I get a ton of his cards to sign. He told me to sign them, but I never signed any after he made the Hall of Fame.

We’ve been mixed up many times — mail, hotel rooms, etc.

The HOFer has a thinner. taller “J,” then leaves off the “an” on occasion. However, Walpole Joe’s letter begs the question:

How many cards of “Little Joe,” obtained before 1990, were signed by the wrong man?

1 thought on “Which ‘Joe Morgan’ Autograph Is Yours?”