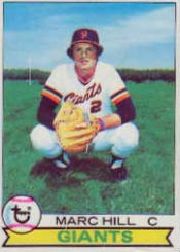 You know you’re getting a special letter when the former player apologizes:

“Sorry about my writing. I had my left hand smashed. Finger still sore.

Despite the pain, the autograph has the same sparkle as it did during his career.

“The ballpark was cold and windy, but gave me six years in big leagues. Pop Ups [his emphasis!] could start off behind the plate and end up down 1st base or 3rd base line. It was tough.”

Did he have a best home run memory? Hill chose three:


Then, when we played the Cardinals, my former team, hit homer off John Denny.


And home run off Tom Seaver.”

Best wishes to Marc Hill and all his fingers.

Tomorrow: how much did a no-hitter pay in 1974? Learn from Dick Bosman.