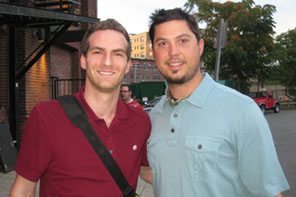 In 2011, Baseball By The Letters will be corresponding with inspiring collectors. We can learn a lot from each other! Topping the list is Matt Raymond, the Boston area collector and author of the blog Autograph University. I’m grateful that he shared some hobby insights with us.

Q: I focus on baseball correspondence in my blog. How much of your collecting is baseball-related? How much is TTM versus in person?

A: First, thanks for the opportunity to share my thoughts with you and your readers. Baseball ranks second to basketball in terms of what I am collecting now. In third, I would lump together non-sports graphing—musicians, comedians and other celebrities.

TTM is how I got into the hobby. I remember being twelve years old sifting through the mail each day after school, looking for a creased envelope with the address in my own handwriting. When there was one, it was like coming upon a Golden Ticket. It may sound funny, but Raul Mondesi was one of my favorite players when I was younger and I remember racing around the house screaming after getting that one back. Since I started graphing in person about five years ago, I haven’t done much through the mail. With that said, I’m considering increasing my TTM activity and getting some of the old timers like Bobby Doerr who are still such good signers. My crystal ball is also telling me that when Baby Raymond comes in a few years my collecting will start to skew toward TTM.

Q: I’d love to include a picture of you with a baseball signer. I had to look twice at a few of the photos to tell who the celeb was. You’re quite a presence. I digress… How does the picture taking and collecting work? How often do you get them signed later, either in person or TTM?

A: To me, the ultimate item is not a game-used jersey or an autographed bat—it’s s a picture with a ballplayer that I can later get personally signed. I’m serious! I would trade any “premium” item I have for a more personal item.

Typically there isn’t enough time to get a picture taken, but I always carry a camera in case the opportunity presents itself. In the spring of 2010 I was outside a Red Sox charity event at which Josh Beckett was appearing. Upon exiting the venue he was met by a swarm of collectors and declined autograph requests (no surprise). I asked him if he’d take a picture with me and he agreed. It’s clear the commercialism of autographs has had a negative impact on the signing habits of a lot of players. With a picture request, they know you’re not making money on their generosity.

Q: How do you explain the Red Sox anti-mail form letter responses instead of signing?

It’s simple to explain—these players get bombarded with requests. I don’t have a problem with the form letters if the players who want to personally respond can still do so (i.e. the mail isn’t automatically routed to a marketing team). I’m also not crazy about the preprinted 4x6s they’re distributing because kids think they have the real deal. I’d rather get nothing back. I think they would be better served to use it as an opportunity to return some sort of unsigned collectible and promote charity events where you do have an opportunity to get a personal autograph.
Q: When did you start the blog? Why?

A: I started  Autograph University in September 2010 after losing momentum on a memoir-style account of my autograph experiences. Writing a book is a huge investment of time and a solitary activity—it was difficult to stay motivated and write consistently. If I did ever finish, there would be many more obstacles to overcome before ever reaching a reader. The blog allows me to publish content quickly and get immediate feedback. More importantly, it allows me to focus less on me and more on how I can help my readers get more enjoyment out of the hobby. Getting a positive comment or retweet from someone is a huge motivator. It’s fulfilling knowing that what I’m writing is resonating with people.

Q: For in-person encounters, you don’t have much time. However, if you have a chance for 1-2 questions/comments with a baseball player, what have you said/asked?
A: It really is unfortunate when there’s only time for “Can you please sign this?” You walk away with an autograph and realize you didn’t make any kind of personal connection. Ideally, the interaction follows the same format as a letter you would write to a player in a TTM request. You may express your admiration and share a personal anecdote about seeing them play, ask for the graph and wish the player luck.

I’m fascinated by the athlete’s perspective on autograph collecting, so in the future I plan to ask more hobby-related questions. I  interviewed Donyell Marshall, a former NBA player, recently about autographs and he shared some great stories. If time allows, I would love to ask baseball players about their signing habits and what they collect.

Q: How do you decide who/what NOT to collect?
A: Great question! Typically, if a person has some level of celebrity I’ll add them to my collection. I know that criterion is pretty broad. But over the past few years, I’ve become a bit more selective as the storage space in our house has dwindled. For example, it’s rare for me to get multiple items signed unless the athlete/entertainer is a star.

There are times, however, when I’ll leave my Sharpie capped. Here’s my list of “untouchables”:

Q: Baseball-related hobby goals for 2011?
A: I have pictures with Dustin Pedroia and Josh Beckett which I would love to get signed. Pedroia denied me one-on-one last year, so hopefully I get another shot. Also, as I mentioned before, I’d like to get some of the retired ballplayers TTM. Sometimes you wait until it’s too late and you miss out on a Bob Feller or Sparky Anderson.

My biggest goal is to continue to build Autograph University into a valuable resource for the autograph community. I want to keep learning about the hobby and share what I know with others.

There is also a new project which is very personal to me that I’d like to see come to fruition in 2011—a website archiving all the baseball memorabilia I’ve collected of my great-grandfather,  Eddie “Doc” Farrell. His career began in 1925 with the New York Giants and he played for several teams—winning a World Series with the Yankees in 1932—before retiring with the Red Sox in 1935. He died before I was born so a lot of what I’ve learned about him is through the items I collect and the stories I hear from my grandmother. Incidentally, my most prized autograph is a letter he wrote in response to a fan’s autograph request in the 1960s. I purchased it on eBay along with the signed index card that was returned with the letter for about thirty bucks.

I commend Matt for sharing his hobby passion with others. Before long, his Autograph University readers will be calling him PROFESSOR Raymond!

1 thought on “Declare Your Major at Autograph University”