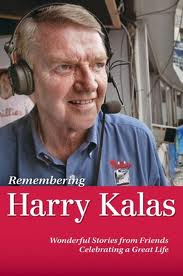 There’s nothing wrong with vanilla ice cream. FoxSports is serving it for the NLCS broadcast. I tried ESPN radio, too.

I yearn for something more distinctive: a broadcaster who thrives on baseball. I’ve been thinking about Harry Kalas and Richie Ashburn. I never heard the pair together. But I heard Harry The K recall his long-time broadcast cohort. Before accepting the Hall of Fame’s Ford Frick Award in 2002, Kalas talked about his Phillies memories.

I sent a note of congratulations that year, asking him to keep talking about Ashburn. Kalas replied:

“Thanks for your kind letter. The Cooperstown weekend is something I will never forget.

Richie was as good a friend as a man could have. Not a game goes by that something will happen on the field that reminds me of ‘His Whitness’ and it’s always with a smile on my face and warmth in my heart.

2 thoughts on “Harry Kalas Wrote Of Richie Ashburn: “As Good A Friend As A Man Could Have””