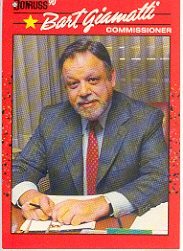 I believed in Bart Giamatti. I don’t think the former commissioner batted 1.000. For example, he didn’t handle relations with umpires perfectly.

Nevertheless, his fandom radiated in every word. His writing made you proud to love baseball. His essays live on, far after his 1989 death.

I wrote to his son Marcus, then performing as Peter Gray on CBS’s Judging Amy. This is what he shared about his famous father back in 2002:

“Thomas — Thank you so much for your nice words about my father. Baseball truly lost its greatest advocate and voice when he passed away. We took in many a game at Fenway, some of the nicest times of my life with him. Thanks for the support you give by watching the show.

No matter what happens with baseball, always stay a loyal fan. The game is the thing. That’s the thing my father would all want us to cherish.