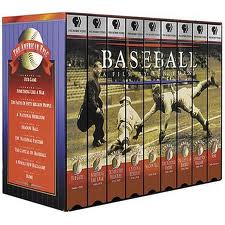 Hmm…add cheese to the leftovers and it becomes a NEW casserole?

I couldn’t help but think that Ken Burns wanted to pump new life into his 1994 marathon documentary by adding “Extra Innings” chapters. A new complete set to buy?

Yes, I know that Pedro Martinez, Joe Torre and Ichiro were included in this sequel. Nevertheless, I saw the exercise as something I’d call “Punditpalooza.”

I gasped to see Keith Olbermann appearing. Keith wrote the backs of my SSPC “Pure Card” set, noting in a note from years ago that Bob Stinson was the only one (now there are others) who wouldn’t autograph the unlicensed card for K.O.

I found on the Olbermann blog an explanation (of sorts) on how he could appear on “Extra Innings” after blasting the original production.

This blog is about baseball STORIES. Not the shiny, sophisticated vignettes from today’s media, but the heart-felt recollections from those who lived the diamond history. If an invisible Midwest fan can glean these on-the-field memories for a couple of stamps, the famed documentarian shouldn’t have trouble reaching the same sources. For instance, Red Sox he mentioned like Kevin Millar and Curt Schilling are fellow media types, right? Did Burns think they were too shy?

Sorry, I didn’t stand up and cheer for these extra innings. I felt more in a college lecture hall than back in a ballpark. When Burns updates his update, I hope he gives more actual team members a chance to speak for themselves.