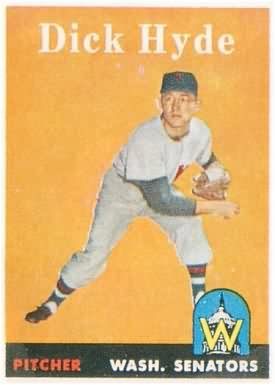 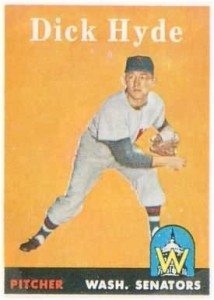 Where have all the submariners gone? Those awesome pitchers from down under?

Nope, not a ’60s folk song. Just me. I couldn’t help but get sentimental looking at an action photo of reliever Dick Hyde. Looking sneaky-smart in those ever-present glasses, Hyde’s motion was almost accidental, an adaptation to injury!
He wrote:

“It came naturally after I hurt my arm pitching in the Army.”

“My pitching coach, ‘Boom Boom’ Beck, did a lot of teaching about my mechanics. I also added a change-up with better control overall.”

I teased Hyde, noting that he retired with a perfect record: as a BASE-STEALER. Sheer perfection in his only career attempt. He confessed, explaining:

“I got a hit off of Billy Monbouquette. Then he must have forgotten me on first base and wound up, so I took off and there was no throw. The rule has changed now so that wouldn’t be a stolen base nowdays.”

Both 1958 and 1960 Topps cards show Hyde more sidearming. I’ve seen him look more like a bowler, his knuckles near scraping the mound. How low can you go?