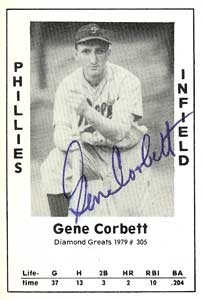 The leaves are falling. Temps are dropping. Every year I ask myself, “How do Midwestern kids play baseball?”

Milder climates and year-round leagues give the edge to southern players. That’s why I’ve always had a special admiration for players who bloomed in northern states.

I wrote to the late Gene Corbett back in 2000. At that time, I found only 140 Minnesotans who had played major league ball. What were his memories?

“I was originally signed by the St. Paul Saints of the American Association. that was in 1932, just out of Central H.S. in St. Paul. However, the Depression caused them to send me to Winnipeg, of the Northern league, where I played for 3 years and was sold to the Phillies.

“I was well treated by the St. Paul press which noted some of the good days and years I had. My parents would drive to Eau Clair, Wis. to see me play, a 2 hour ride.

I played on the St. Paul sandlots which also produced Dave Winfield and Dick Seibert.”