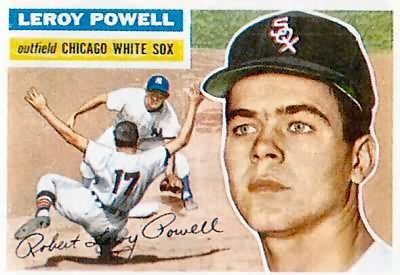 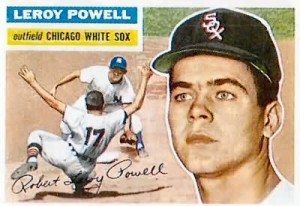 Bob Powell went from collegiate All-American at Michigan State to invisible bench-rider for the 1955 and ’57 Chicago White Sox.

Even Powell’s one baseball card appearance brought frustration. He wrote:


Thanks for your letter and I’ll answer as best I can.

(The 1956 Topps card identified him by his middle name. Look close to see his full autograph.)

“That is not me sliding as shown on the card. I don’t remember what was paid for being on the card (very little) and I cannot remember the first time I saw the card.”

Due to Powell’s signing bonus, the team had to keep him on the roster through the season. The White Sox challenged Powell to convert to pitcher for the 1957 season. Despite all the training, he never got a chance on the mound, either.

“Referring to pitching, Ray Berres was the coach to oversee pitching and was very helpful. Starting or relieving either was okay as long as one is playing. The Sox went with veterans and not rookies.”

Powell explained that his $36,000 wasn’t a bonus, but his entire contract for three years.

“‘Bonus Baby’ was anyone signing for more than $7,200 a year and I signed for three years for $36,000. At that time, the Major League minimum salary was $7,200 year. Anything over that amount was considered a bonus.”

I noted in my letter that I was touched at how he paid off the mortgage on his parents’ home and bought clothes for his siblings.

“I helped the family any way I could but the good Lord was the one to open all doors and provide.”

He closed his letter with words of faith and gratitude.

“I thank the good Lord for all of my ability and paving the way for a college degree. It has paid off in my life.


“I still correspond to mail requests and give praise to the Good Lord for all the help from different people (high school coach and grandfather mainly) who never gave up on me.


The game is sure different today (more teams and money).


God bless you, Tom, and keep up the good work.

The SABR Bio Project featured a great profile of Powell, showcasing the interviewing and writing talents of member Jim Sargent.