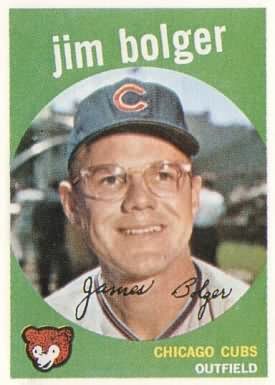 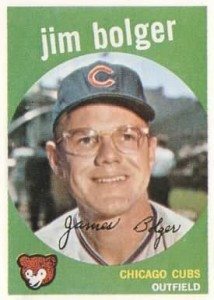 Jim Bolger’s career in the majors stretched from 1950 to 1959. From making a major league debut at age 18, Bolger found infrequent moments in the limelight. He led the senior circuit in pinch-hitting in 1957. When the Cubs notched a home win against Milwaukee on May 2, 1958, they had Bolger and his three-run homer onto Waveland Avenue to thank. (We have retrosheet.org to thank for that insight!)

Q: What was your secret to pinch-hitting success? Why do you think some players have never fared well as pinch-hitters?

A: Hit the first pitch that looked good to hit. They were afraid to look bad at the plate.

Q: Not a lot of 1950s players wore eyeglasses. When did glasses seem like a burden or challenge?

A: They were a burden from day one. I had some very good years in the high minors but the fact that I wore glasses was not a good thing in a lot of people’s minds. One manager said that a player wearing glasses couldn’t play center field.

I ended up disappointed in the years that I stayed in the majors. My career wasn’t as good as I expected it to be, but I always wanted to play pro ball ever since I was six years old. After high school, I could have gone to just about any college in the states to play football, but my heart was in baseball.