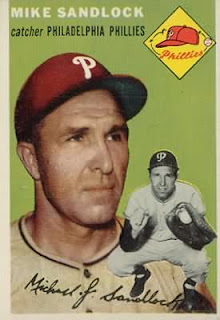 I don’t get credit for that one. It’s from Mike Sandlock, yet another witty catcher.

My first home run in the Polo Grounds. I saw the ball go over the Chesterfield Sign.

Second? The one in Ebbets Field, that one hit the clock in center.

They couldn’t fix it, so they moved to L.A.

Both off the same pitcher, Harry Feldman.

Why is Mike Sandlock on my heroes list? He is a World War II veteran who delayed the start of his major league career. He’s been a staunch supporter of the Baseball Assistance Team, getting financial aid to disadvantaged former players. Plus, I think he could go joke for joke against Garagiola, Uecker or any other receiver!