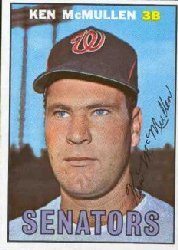 After replying to an autograph request that included personalizing a card, McMullen suffered the recent wrath of a collector on a hobby website.

The post claimed that McMullen added “To —” only as a defense. He wanted to devalue the autograph on ebay, asserted the collector. The cynical attempt at humor followed, speculating on whether McMullen really thinks his autograph would be that valuable and in demand?

The veteran third baseman believed the letter he received. In turn, he truly cared about the “fan” writing. McMullen wanted to prove his gratitude and show that he read the letter by inscribing the card.

An autograph is an autograph. Yes, someday at an estate sale, buyers may moan, “All these autographs are TO TOM.” That’s because each signature tells three stories: the player’s, my own and the time we communicated. I’m not collecting future commodities for resale. I’m collecting memories NOW.