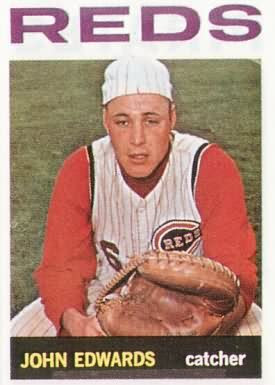 Johnny Edwards shined behind the plate from 1961-74, serving the Reds, Cardinals and then Astros.

A three-time All-Star and recipient of two Gold Gloves, Edwards doesn’t remember Jim Maloney’s two gems as the majestic records some fans might.

“In the first no-hitter, I was taken out for a pinch-runner. Boy, was I mad.

(Ironically, Maloney was credited only with the loss, not a no-no, as the Mets rallied in 11 innings. See the box score here.)

“In the second no-hitter, Jim was so wild, I believe he walked 11 hittters. Every time in the late innings, there was a man on third and I was afraid of losing the game on a wild pitch.”

(This happier ending, this official no-hitter, is documented here.)

Edwards followed the path of Curt Flood. Both moved from the Reds to Cardinals.

“I didn’t play with Curt in Cincinnati, but he was great outfielder with St. Louis. The modern players should thank him. He (Edwards’ emphasis) was responsible for obtaining free agency. The owners blackballed him. I don’t think he will get into the Hall.”

Ironically, Edwards never mentioned partnering with pitcher Ray Washburn on a no-hitter for the Cardinals in 1968. Flood patrolled center field that day.

Edwards once told Tim McCarver that he remembered Flood always cheering on teammates, no matter the score or Flood’s own success in the game.

You can’t help but keep cheering for Johnny Edwards, too.