No one knows the truth of that old adage better than George Rose. The collector-turned-author has penned two fine books, One Hit Wonders and One Win Wonders. Both tell the overlooked stories of the men who tasted only the briefest glory in the bigs.
Here’s George’s fine e-interview:

Q: You were an autograph collector before an author? How much of your collecting has been in person vs. TTM? First autograph?

A: I remember getting a pack of 1978 Topps for some reason or another when I was 6, but I didn’t really start collecting baseball cards until I was 8 in 1980. That was 32 years ago, and I haven’t stopped.

The first autographs I ever got were in person: Rick Leach and Dave Rozema did a signing at a local mall before the start of the 1982 season, and I was hooked. I remember reading in one of the baseball price guides at the time (before Beckett) that some players signed autographs through the mail if you wrote to the team. My first TTM request was Pete Rose on a 1982 Topps. He was my favorite non-Tiger at the time, because we shared the same last name. I wrote to Johnny Bench next, and it cascaded from there. I purchased Dennis Eckes and Jack Smallings’ Baseball Address book, and my mailbox saw a drastic rise in use.

Aside from the very rare baseball card show in my area (I remember meeting Mickey Lolich at one and Denny McLain at another), all of my collection was TTM until I started driving in 1989. By that time I had a collection of probably 3,000 autographed cards.

Q: Tell Me About ONE HIT WONDERS in 2004. Who did you make contact via mail with? Had you ever asked questions by mail before?

A: When I was in college in the early ’90s I made it my goal to be a published author by age 30. I had no subject or idea in mind, I just want to write a book. I got serious about it in 2000, and came up with an idea that had never been done before. There were a couple of books out about cup of coffee players at the time (Richard Tellis’ Once Around the Bases is a great one) but no one had ever wrote a book about player who had just one career hit.

So that became my project. I started writing every living member of the One-Hit club (about 200) in 2001 and asked them to share their memories of their one career hit. In these letters I did not request an autograph. There is a very fine line between being a researcher and an autograph collector, and you don’t want to cross that line. About 50% of the players I wrote responded; a few said they weren’t interested, some just gave me a very brief synopsis, and some wrote 3+ page letters back. I talked to some players and/or their widows/spouses on the phone, and met about a dozen in person.

Q: Collectors complain about trying to write a thoughtful letter to a cup of coffee player. Do you have examples of  players unwilling to talk about their brief careers? Who did you win over?

A: Back when I started this project, there was very little information on the internet about these types of players. Minor League data was for the most part  non-existent, and www.baseball-reference.com was just starting. I researched these  players the old fashion way; in the libraries with microfilm and dug through  their files at the Hall of Fame. (The HOF has a file on every player who ever  appeared in at least one MLB game. Some of these players had empty files,  there was so little known about them).

Slowly I put the book together and it  came out in 2004. Now the internet has much better info about obscure players, and baseball-reference, the baseball cube (and others) all have minor league data, and sometimes college and high school records.

I would suggest that anyone wanting to write these players do a little research, and let the player   know that you are interested in their career and why.

Some players did refuse to talk about their brief careers, some are still very bitter for one reason or another 30, 40, 50 years after the fact. Most though have fond memories of their time in the Majors, no matter how short.

One player that sticks out in my mind is Dana Williams. I interviewed him in 2002 when he was coaching the Wisconsin Timber Rattlers in the Midwest league. He was an incredible hitter in the minors, and was part of a tremendously talented group of outfielders coming up through the Red Sox system in the mid 80’s. A group of five were all ready for the Major Leagues by 1986-7: Mike Greenwell, Ellis Burks, Kevin Romine, and Brady Anderson. 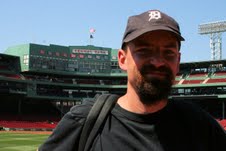 In 1988, the Red Sox asked him to change his approach  and become a home run hitter (his previous high had been 8). He complied, and hit a career high 10 in ’88, but his averaged dropped to .253. Going into Spring Training in ’89 as a 25-year-old, he was no longer a prospect and Burks and Greenwell were established stars. He was finally called up in June ’89 to be showcased as trade-bait, and later that year he was shipped off to the White Sox. He did not get along with his manager in AAA Vancouver, and was regulated to part-time duty. Dana split ’90 with the White Sox and Cubs   systems, and was out of organized baseball by 1991 at age 28.

He went on to become one of the first stars of the Northern League, and then enjoyed a long career as a minor league coach and manager. When I spoke to him in 2002 he was still bitter about the way he was treated by the Red Sox, and he did not watch MLB because he couldn’t stand watching former teammates and friends (like Ellis Burks), still playing.

I’ve kept in contact with him over the years, and now that everyone he played with in the minors is retired, he enjoys watching players he coached having success in the majors (such as Adam Jones).

Q: For both your books, I think some readers might guess that all the players would be angry and bitter over not getting more chances in  the majors. Who’ve been some grateful exceptions?

A: There are a few players who seem to have only very fond memories of their MLB careers and are very grateful they got a chance to live their dream. Brain Koelling, Neil Fialla, John Sevcik, Rankin Johnson III, Chuck Lindstrom, Dave Dowling, and Brad Holman come to mind.

Q: What kind of feedback have you gotten from those in baseball about the books?

A:  I’ve been blessed with the support I’ve received from a lot of people in baseball. I’ve been on many national radio shows, book tours, and have met some great people in the game. The support the A. Bartlett Giamatti Library at the Hall of Fame has given me has been tremendous.

Q: I remember you posted on SCN about Jake Striker after he lost his wife. How many of the men profiled have you kept in touch with?

A: I’m lucky I can call many of these guys my friends. I keep in regular touch with about a dozen of the players I’ve profiled in my books. A lot of these guys reported a big increase in the amount of autograph requests they received  after the books came out, and continue to do so years afterwords. Jake is a good friend of mine, and one of the nicest men to ever play the game. He responds to 100% of his requests, and usually includes extras and a letter.

Q: I was impressed that you sent a thank-you note with 71 extra card  to Tracy Jones as a GIFT, after he sent free autographs to anyone e-mailing him. How many thank you notes do you send for autographs?

A: Of course I say please and thank you for every request, but when a   player goes above and beyond, I feel it is only right to thank him for his efforts. I thought the offer Mr. Jones made of sending everyone an autographed card who simply asked for one was tremendous. I remember watching him play with the Tigers, and he was one of my favorites. I thought it was only right that I send him some cards so he can continue to send them out if he so chooses.

A: I have three books on the burners right now. 1) The Complete Staff, about the 1980 Oakland A’s starting five 2) A book about the history of the Silver Slugger Award 3) A book about professional baseball players who died during the season or while they were still active. Another volume of One Win Wonders is also in the works.

A: My collection has changed many times since I  started back in 1982. In the past few years I’ve focused on collecting autographs of players I feature in my books. I’m also the President of Walk For Kate (www.walkforkate.org), a non-profit charitable organization striding to find a cure for brain tumors.

Lately I’ve been asking players to sign items that we can later auction off at one of our various events. The response from former players has been outstanding, I am constantly amazed at how generous retired players can be.

Q: Advice to a collector who’d like to seek something besides an autograph for their next fan letter?

A:Tips for asking a good question? My best advice would be to be sincere in your request and do some research before writing the player. Find something in his career that interests you, and ask   about it. Maybe he had a career-year in the minors one season, or had a tremendous college career. Most of the more obscure players love to be remembered, and are very fan-friendly.

Q: How can readers get your books autographed from you?

My thanks to George. If any of you would have an autographed contribution to this all-star author’s noble charity, please e-mail him.

Coming Monday: Another side of one of baseball’s biggest pranksters of the 1960s.