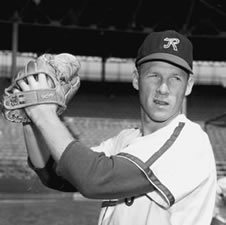 John Faszholz typified the “gap” player still seen today. A star at the AAA level that gets little to no chance to succeed in the majors.

The modest moundsman is a member of the Rochester Red Wings Hall of Fame. With no bitterness about what might have been in the majors, Faszholz recalled his memories of a brief stay in St. Louis, along with the decision that brought him to a lasting, even more fulfilling career. In a generous 2000 reply, he wrote:

Thanks so much for your letter which shows your obvious interest in the great game of baseball. I consider myself very fortunate to have been a part of the game for 12 seasons, and to have competed against, or been teammate of, so many great players.

In response to your questions:

1. Sportsman’s Park: A typical ‘old time’ ballpark where the fans were close to the field. The dimensions were irregular: 354 feet down the left field foul line; only 310 feet down the right field line; about 410-420 to dead center field. There was a wire fence from the right field pavilion) which meant that a hitter had to hit the ball to the pavilion roof (about 25 feet high) for a home run. Any home run into the left field bleachers was a pretty good poke.

2. My nickname ‘Preacher’ — During most of the years that I played, I spent the off-season in school at Concordia Theological Seminary in St. Louis. Since I went to school only one semester a year, it took me 10 years to complete my Seminary courses. Because of this off-season activity, writers and teammates started calling me ‘Preacher.’ After I retired from the game and after I finished my Seminary work, I was, in fact, ordained as a Lutheran minister (1958). My ministry was mainly in teaching and coaching in an education institution of our church body. I retired in 1990.”

Trolling the riches of Baseball Alamanac, I found this fascinating feature about the two lives of Jack Faszholz, written by Pat Doyle. Great photos, too.

Tomorrow: stand on the mound in St. Louis with Jack Faszholz as he relives his first and only start!