The hobby will never forget the late Joe DiGangi. This blog recalled the extraordinary efforts of the torchbearer of Yankees history with a June 23 post. Two follow-up responses need to be shared, the second from Mr. DiGangi’s own son.

Just wanted to let you know how much I enjoyed this post. My response from Mr. DiGangi is among my very favorites. I sent him 2 4×6 photos of himself with Joe DiMaggio and Bill Dickey as well as a 1933 Yankee team photo previously signed by Bill Werber. I received back from him a Yankees emblem with his name that he signed, a photo of him with Tommy Lasorda,signed. A 1941 Yankee team photo which he wrote


“I am not in this photo since minor league players came from Newark and Kansas City to look them over. I and two others had to take a back seat after all the work we did all year long. PS I got $500 for my cut.”


I am assuming he was talking about the Yankees looking over some minor leaguers, and his World Series cut.


I also received from him a photo of himself catching while the Babe was taking a swing during spring training in 1933. Also a copy of the famous “Lou Gehrig Luckiest Man” speech photo, which he was in the bullpen warming up Red Ruffing.


In his letter (Nov 6, 2008) he apologized for taking so long as his wife suffered a stroke 2 months previous. He asked me to keep her in my prayers. He also stated she was on the good side of it all now. Joe said that being in the same clubhouse as Babe Ruth, and Babe giving Joe a new pair of spikes sure made a hit with him. Joe called Babe “Mr Baseball” of his day, and the whole team in general was great. He told me he went to war and played baseball in Oahu, Hawaii and Honolulu with his Seabee team and played the other service teams. He stated he worked hard but had lots of fun in Hawaii. He then went to the Marshall Islands for 9 months, and then on to Saigon for 13 months. The war ended and he went back to Brooklyn. He finally closed by telling me to write him anytime, and signed for him and his wife, Connie.”

Everyone found Joe DiGangi to be an autograph collector’s best friend. How could someone have such enthusiasm for the game he left more than 60 years earlier? His son provided additional insights with this moving letter:

“Thank you for the kind letter about my Dad –Joseph DiGangi —who was the Bullpen Catcher for the Yankees from 1933 to 1942.


They actually missed the Real Game by not approaching my Father while he was still alive and asking for his story.


That special 1933 Yankee team has most members of any team– in any league in history —to be in the Baseball Hall of Fame– and that is indeed my old man is sitting in the front row of the 1933 Team picture. How many son’s can say that.??


It was never an issue with him that he was just the bullpen warm up catcher and didn’t have a number on his pinstripes or that he only made $1,200. a year showing up for Home Games. The Pride he carried was from the fact that he actually wore the Yankee Pinstripes and he knew only a very few men could ever lay claim to that.


Yet those crippled and claw shaped fingers scrawled out hundreds of hand written historical letters –often written in pencil–often several pages long—sent to any true believer of the Game who requested it.


His letters described the Pride of what it was like to be be a dirt poor kid from Brooklyn — to take the subway on Game Day to the Stadium–to Yankee Stadium–to the House That Ruth Built and to suit up with all the Greats; to spend an afternoon playing a Game that will never be forgotten or ever be repeated–


And maybe most importantly –that Pride came from knowing he was a real part of history and that his being there at that very moment actually mattered to men who we can only read about and admire in history books.


That’s Yankee Pride– and he had it.


He shared that Pride with those who took the time to listen to his stories. He gave away hundreds of Yankee pictures to hundreds of young boys and to hundreds of old men. He even gave a few to a couple of Presidents. And every one of them knew he was the real deal—He was the guy from Brooklyn –who played the Game –when it truly was a Game.


That was my Dad.

Thanks to Zell’s TTM Autographs for use of this image — a couple of Joes! 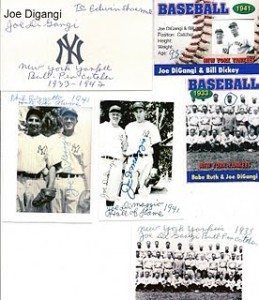