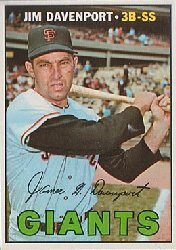 When Jim Davenport passed away at age 82 this month, I remembered his polite bafflement.

I wasn’t alone. According to the ever-trusty SportsCollectors.net, Davenport replied to 298 of 314 documented letters. Best of all, even into this January, he was doing it with sterling penmanship.

While Davenport never seemed to be a quote machine or natural baseball storyteller, he inspired this impressive Alabama retrospective. 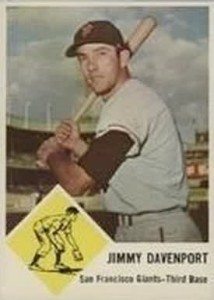 Jim Davenport could be the subject of a great science experiment.

I’ve wondered if star players would have the same quantity and quality of baseball memories that their part-time counterparts enjoy. Or, did the top-tier starters spend so much time defending their jobs that they didn’t have time to savor each game?

1. What was it like playing in Seals Stadium, as compared to Candlestick Park?

2. What did winning the 1962 Gold Glove mean to you? When did you get the news of the award, and when did you receive the trophy?

I think my letter shocked him. I included a second sheet of paper for his reply. He began with the customary autograph:

Then, he added the intrigue:

“Tom, I don’t remember all the things you are talking about but thanks anyway.

Never discount the experiences of any major leaguer. The least-seen player may have been the greatest observer.