I like  the word “teammate.” Someone who gives selflessly.

I never played with the major league pitcher. But I like to think I’m on the same team as Jeff Schultz.

The http://www.sportscollectors.net/ member posted that he received 4 out of 4 cards returned autographed by the South Carolina retiree in November, all in less than 10 days.

Jeff added the mention that he enclosed 46 extras for the one-time Pirate.

Jeff knew that Mr. Kipper was a collector. He knew about the 1997 house fire that wiped out the former player’s collection. A sincere thank-you note came after the gift.

He didn’t sell Bob Kipper the cards.
He didn’t trade him extra cards.
He GAVE!

You don’t have to enclose money or extra cards when you write to former players. You know what you hope to get from the letter. Before you mail, ask yourself what you’re GIVING the person you’ve written. 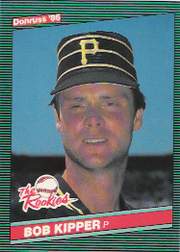 One of the best hobby stories of the 1990s starred pitcher Bob Kipper.

Yes, Kipper’s last year in the majors came in 1992. He lost his baseball card collection in a 1997 house fire. That’s when collectors proved why this hobby is special.

I contacted Kipper when writing my 2001 book Collecting Baseball Cards. At that time, he had appeared on 43 different cards. His gratitude hadn’t dimmed. Kipper replied:

“Till this day, I still get a charge out of signing a baseball card of mine. It is definitely a big thrill to be on so many baseball cards. It was my dream to become a major league baseball player. I think it’s a kick to think other individuals would actually want an autograph of mine!”