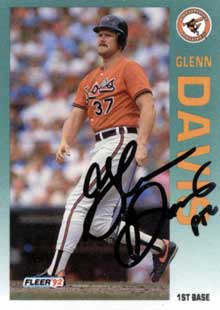 In case you missed these inspiring comments by Tim (regarding elusive signer Glenn Davis), here’s a recap:

“I recently received Glenn Davis through the mail. I sent my request to his home address and included a small donation for The Carpenter’s Way, a home for children that Mr. Davis established. He seemed to appreciate the donation since he signed the cards that I sent and included an extra card signed.

Sometimes it takes a little research and creativity to get some players to sign.”

I wanted to share them again, because I think I understand the lesson they provide. I thank Tim for making a huge point that everyone in the hobby needs to remember.

No, I don’t think that everyone sending a donation to The Carpenter’s Way will guarantee that Davis signs forever. He may. Or, he may start asking for higher and higher donations. Personal interaction can devolve into a mere business transaction.

Tim gave a gift. That’s why he got one in return. He didn’t HAVE to make a donation. He WANTED to.

Money isn’t the ultimate answer. Tim created a personal appeal to Davis. He did more than quote career HR numbers. Tim’s letter addressed Davis as a player and person. That’s the goal I set for every letter I send.

Tomorrow: Learn the math of baseball, with pitcher-turned-teacher Dave Fleming