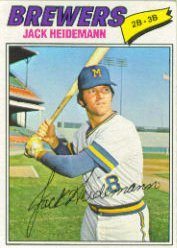 While many teens are working on their first car (or first beer), Jack Heidemann set his sights higher. The 19-year-old went from first-round draft pick in 1967 to major leaguer at age 19. By age 20, he owned Cleveland’s starting shortstop position.

I was intrigued with his youth. Legal drinking ages. Older teammates who might see him more as a little brother than a peer. Would teammates include him in post-game socializing? Heidemann responded:

“My roomie was Eddie Leon, All-American shortstop out of Arizona. Cleveland put him at second base for me to become their shortstop.

Being the youngest on the team, I just hung out…sometimes I got to go…sometimes I was by myself.”

Part of Heidemann’s stellar 1970 season included a 5-for-5 game. What did he recall?

Looking at his career stats, I pointed out that his nine career homers were nine more than I hit in Little League. Did he savor details on one or two memorable blasts?

“Blue Moon Odom…Knuckleballer Jack Samford. I probably would have to look up to see when/where I hit ’em.”

Thanks to the baseball braintrust at http://www.retrosheet.org/, I did. In order, the nine pitchers Heidemann blasted homers against included:

By the way, Heidemann’s autograph still looks like the facsimile on his Topps cards!