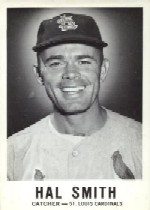 Fans in the late 1950s seemed to have double vision. Wasn’t there a catcher named Hal Smith?

“The first time I met the ‘other’ Hal, he was with Kansas City and we played them in a pre-season exhibition game. And would you believe — I was on third base and he picked me off! Of course, I got a little lecture from (manager) Fred Hutchinson for that little event.”

I asked about his three hits and six RBI versus the Giants on May 8, 1957. He told me of his fleeting fame:

“The thing I remember about that is this: I was invited to be on Frankie Frisch’s post-game show. I figured I’d get a gift of maybe $25 or a pen and pencil or even a pair of slacks, which was usually what they did back then. Well, I got a six pack of Brylcream. I am bald-headed so that really came in handy. I still have a ‘five’ pack left!!”

Smith worked for years as a Cardinals scout. His insight scouting the Yankees’ AAA team compelled the Cardinals to ask for Willie McGee in a trade. Smith remembered:

“When I saw Willie in Nashville, he really impressed me with his speed and his defensive ability and he was a switch-hitter. Whitey Herzog was manager at that time and I knew that Willie was his kind of player.”

To learn more about this storytelling catcher, including details on his book, check out his website. By the way, his book is titled The Barling Darling: Hal Smith in American Baseball

Wouldn’t you like to have a nickname based on your hometown, too?