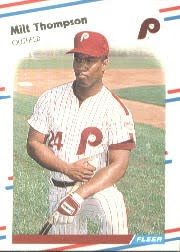 Long before Milt Thompson dished out batting tips, he offered me a valuable hobby lesson.

I believe the year was 1989. I was in St. Louis, working on my book Redbirds Revisited. I was waiting in the Cardinals main office in “old” Busch Stadium.

I heard rubber pounding the pavement outside. A man in his 40s came sprinting to the door, shouting, “Sir, may I have your autograph?”

The “Sir” was faster, slipping in to the restricted office space without signing.

The receptionist greeted Thompson. She had his comp tickets ready for that night’s game.

“Sir?” he asked her with an impish grin. “You know anyone named ‘Sir’? My name’s not Sir!”

Sure, Thompson could have felt ornery, or feared that one autograph collector would attract a swarm of other seekers.

Still, his comment stuck. I’ve done everything possible in the years since to personalize every contact I make with every player and retiree. I’ve wanted to make every person feel unique. I research everyone before writing. My letter proves I KNOW them, but want to know them better.