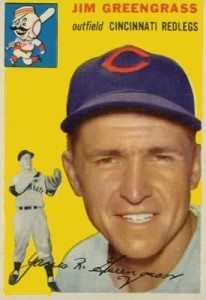 Some players couldn’t dream up such a great stage name.

GREENGRASS. What a perfect name for baseball. Well, maybe “Homerun” would be a decent substitute for “Owens.”

However, phlebitis (painful inflammation of leg veins) short-circuited Greengrass’s career. His final big-league days would come with the 1956 Phillies.

Thanks for the kind words and hope this note finds you and your family in good health and happy.

1. No making your contracts in those days. Highest salary was $40,000. Stan Musial and Ted Williams.

3. I have had that (phlebitis) since then, so you can see not much known about (phlebitis). And there is no cure. It’s tough but I have learned to live with pain. My blood is cloddish. Both legs. But still manage to get around some.

Many happy innings to you, Tom

In the last month, this is the first time I’ve been thrown a curve with any handwriting. Jim’s tight, small cursive is tricky here. He’s saying that #23 was his “basic” number or his “luckie” number. Both sound good to me.

A swell name. Someone who’s been there that still says CINCY. Let’s hope the 2010 season brings teams some more “green grasses.” Thanks to Jim, I know I’ll have many happy innings.

11 thoughts on “Jim Greengrass of Home (in Cincy)”